After reading Pooey's post about QVM donuts a few days ago made me feel like some deep fried dough covered in sugar for myself! Luckily, I'm in exactly the right country for those kinds of sweeties. I got up a bit late and wasn't able to make myself breakfast but it was okay because there's a bakery of sorts in my local U-bahn stop. Mein Deutsch ist sehr crappy, so I pointed towards something donut-y looking, paid €1.35 and continued on my way. 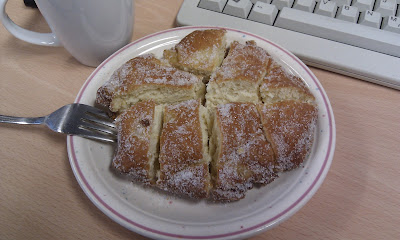 Eating it at work, it wasn't as comforting as a warm jam donut and I think there was a meagre attempt to make it apple flavoured. Would I eat it again? Maybe, once I made my way through all the other pastries but I suspect there would be something I preferred more.

And then this morning, I oddly enough managed to get out of my apartment a little bit earlier than normal today and so I decided to walk the *long way* to the U-bahn, hoping to meet eine Bäckerei (bakery). Now because the long way basically consists of walking in the other direction around the block, I didn't meet one, I went back to the store in the U-bahn stop and did the point and smile method of ordering again. 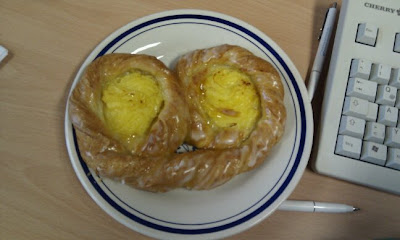 Vanilla Pudding-schnecke
(aka, vanilla pudding snail - learning a language through food *thumbs up*)
Believe it or not, I actually thought it was half the size of what it actually is (like a danish), and was kinda horrified when the woman picked it out of the window and put it in the paper bag. Anyway, I'm slowly making my way through it now and my preliminary thoughts are that I'm really liking the pastry, oddly not enamoured of the vanilla custard! The flavour is nice enough but the baking has given it a kinda plasticy crust as opposed to a soft Asian egg tart layer or a sugary French-style crust. No matter, oh and I'm still working my way through it!

at 9:38 pm Posted by mallymoodle