Remember this entry where I decided to make croissants? To be honest, after that initial foray intro French baking with yeast, I attempted to make baguettes but they failed spectacularly and I got disheartened about modifying a recipe I knew worked. If it ain't broke, don't fix it and all that.

Well. I'm on a diet of sorts right now and decided to make croissants last night. Hehehehe. And I also decided to use my scientific knowledge to get the experiment down to a reasonable procedure time! After all, incubating your immuno in the fridge is just to decrease background - you could leave it on the bench for one hour at room temperature! (Christ, I'm such a nerd.)

So here it is! Incubation modifications are all approximate based on what I did in the intervening time. The Pom says TV scheduling is not a good enough key to time, you can decide for yourselves.

Ingredients (same as before)

Instructions
I divided the dough in half, one half of which is in the freezer (I'll let you know how defrosted croissant dough works), packed 4 in the fridge overnight, and test baked 2 that night. Here's how they came out. 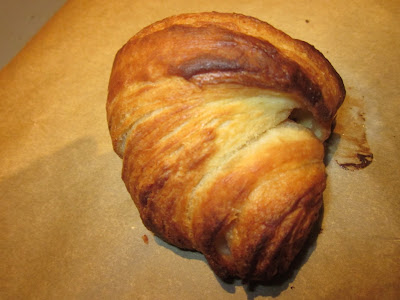 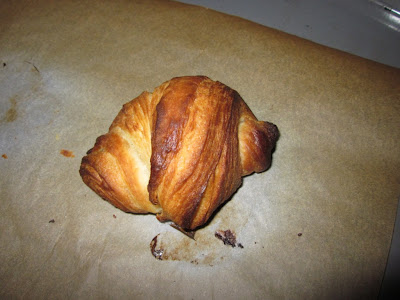 Didn't get a pic of the inside before I ate it but it was pretty fluffy.
The overnight ones were taken to work - approximate time out of the fridge would be 1.5 hours? - before baking. This is how those ones came out! 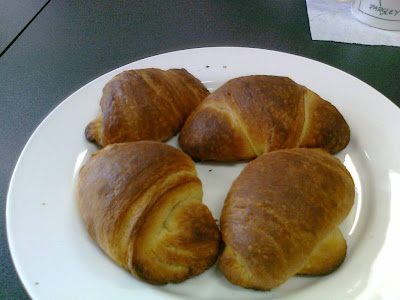 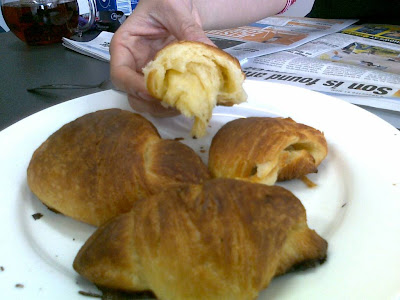 I think the extra standing time meant the second batch puffed up a bit more than the rushed ones but they were both fluffy which is more than I can say for my baguettes. So yes. From three days to about 4-5 hours - now it's much less ridiculous to bake your own croissants!