They'll Let Any Riff Raff In

It's with sadness that I'm writing this post from Melbourne. Tokyo was an experience like no other; the people, culture, history and city won't soon be forgotten and as I review the 100's of pictures there's probably around 10 food related posts buried in there. Like "Mercy" which was played with siblings, I'm happy to relent on the posts if they become too repetitive.

One of the deals widely available in Tokyo are set lunch packages. Places where you wouldn't normally set a foot in due to the price suddenly appear on the radar and it's a fantastic idea to increasing patronage in a highly competitive market. Yes, it was still more than what you would pay on the busy streets, but it's certainly a different experience and a side to Tokyo you wouldn't normally be able to experience at regular prices. More often than not you will able to choose from a variety of set menus at varying prices.

The Fish Bank is located in the same ward as the famous Tokyo Fish Market, and perched on the 41st floor, I wasn't able to secure a window seat, however with 6 courses coming to 2,749 yen, ($34Aud) food more than occupied my senses. (Other set menu options start at $16Aud) Before stepping in, I put a top over my t-shirt, not because it was required, but I figured that any restaurant that has table cloths shouldn't be subject to a collar-less patron.

First up was a fresh oyster, all the way from Tasmania I was informed. When I mentioned my home was merely a stones throw away, this brought out a chuckle from the waiter. With chili sauce to add as needed, it was certainly fresher than the consumer who travelled just as far. 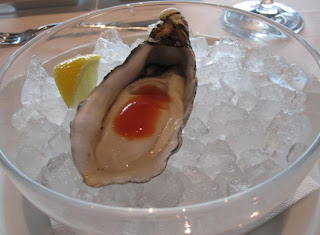 Next 2 were a tomato filled with couscous with a spread of octopus and fish (I can't remember for the life of me) with fresh asparagus and baby carrots.

For the final 2 courses before dessert, the dishes entailed a penne with a beef ragout sauce and a beef rissole on eggplant accompanied with tomato topped with a poached egg and a piece of seared fish on a bed of mashed potatoes. The former was certainly the standout of these offerings.

For dessert, green tea and strawberry icecream impeccably presented on top of some equivalently flavoured macaroons rounded out the meal perfectly. 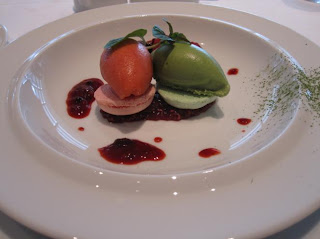