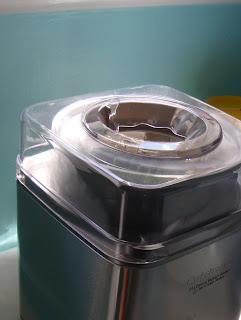 Keen to anoint the new ice cream maker I received for my birthday (from the awesome Serenity Later!), we set out to make something over the weekend. While the bowl was freezing (at least 6 hours) to ensure contents is cooled as it's churned- we had plenty of time to think about  potential flavours/combinations to try. (So many to try, look forward to reporting back successes/and not so successful attempts!) Thought it best to start with a classic vanilla bean ice cream, the recipe coming from with the booklet included in the recipe manual (yay-it's even got raspberry margarita's- it's going to be a good Summer!). Vanilla. Boring? Maybe. Still, it's important to get the basics right before trying out something more challenging like smoked capsicum and sweet chilli sorbet.


In the end, we relented and decided to split the mixture into two parts and do a little bit of experimenting (what do you expect from a scientist?). One part vanilla, one part boysenberry swirl. 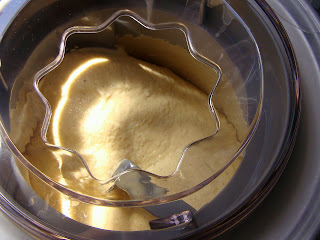 Making the ice cream base is simple- make a vanilla custard from scratch, add cream and then allow the machine to work its magic! After mixing for 30 minutes, the ice cream is very thick but needs to be frozen for another 2 hours for the proper consistency.

For the best ripple effect, add puree at the very last moment and mix for 15-30 seconds before transferring to a container. Alternatively you can manually stir it through as we decide to do  because the mixture was becoming too homogeneous.

And the final result? 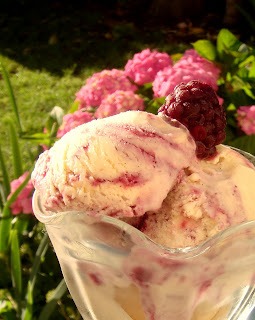