I have a sweet tooth which is almost painful. Seriously, it's a good thing I enjoy exercise otherwise I'd be far more deliciously round than I am now. Although I do love them, it is for the best that Tim Tams are not one of my favourite biscuits, probably due to the overload of chocolate without contrasting flavour. I have previously described Tim Tams to non-Aussie friends as *two chocolate biscuits, separated by a layer of chocolate cream, covered in milk chocolate!*

To try and tempt me back to buying them, the evil people in charge of Tim Tams decided to branch out into new flavours like kahlua and white chocolate. I was unconvinced, and they failed to bring back into the fold. They even tried mint crush! I adored them (mmm, mint and chocolate combination!) but the exorbitant price to biscuit ratio stopped me from investing heavily. Time passed and I didn't think much more about it.

Well imagine my horror and delight when I discovered Tim Tams (and a number of other Arnotts biscuits) are currently on sale right now at my local supermarket, and it was much to my delight and horror that I saw flavours I hadn't seen before! Sale or no sale, I decided to be disciplined and limit myself to just one flavour. I chose *Chewy Caramel*. 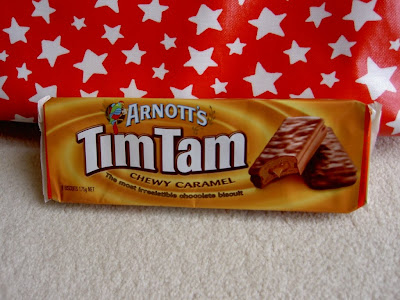 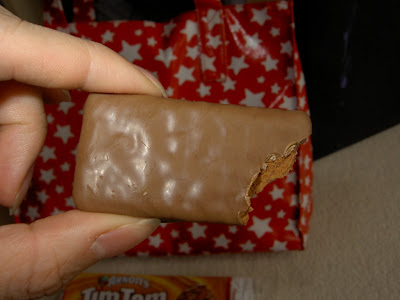 Even though I counselled myself not to be fooled by the artistic interpretation of what it should be like, I bit into the biscuit, seeking the gooey gooey caramel. I was hurt to not find it! 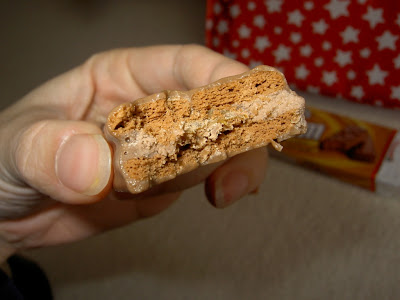 I was about to feel bitterly, bitterly disappointed until I delved further into the sweetness and found the small reservoir of caramel about halfway in!! 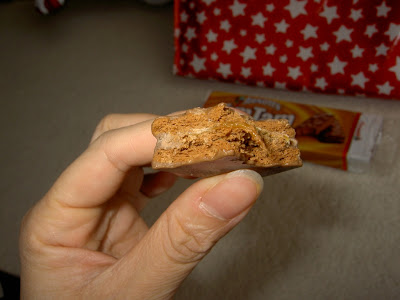 Towards the end, I did find strings of caramel forming where my voracious teeth tore it apart.
So what's the assessment? After having eaten another two in short order, I think I could love these very easily. BUT I also think that if I keep biting into the end that has *less* caramel than the other, I would be hurt over and over again. I figure I have until the end of the packet to decide if I should take a joyous running jump into love or turn my back on the possibility and walk away from potential hurt. Decisions, decisions *sigh*.

at 4:25 pm Posted by mallymoodle