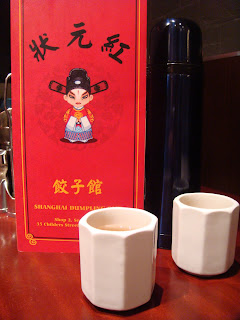 On my latest visit to the nation's capital Serenity Later suggested we try out a new dumplings place which has sprung up just within the last week. Anyone living in Canberra laments over the lack of good, affordable dumplings places and having to make the 3hr+ bus journey to Sydney or fly to Melbourne to get their fix. Shanghai dumplings cafe is one of several new restaurants and shops which have recently popped up in the north east end of ANU/north west end of Civic- to cater to all the students living in the new UniLodge accommodation. 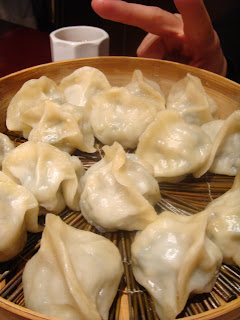 The place was chock-full! There were lots of students but whole families having Sunday supper. We were lucky to get a table but had to wait a while to get served. Unfortunately because the place is so new some of the items were not available so we had to forgo our regular steamed prawn dumplings, although we weren't disappointed by the other dumpling options - and there's lots! 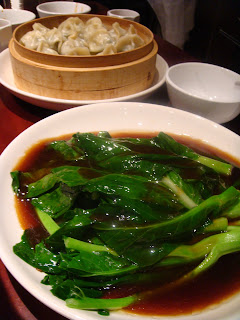 As we were paying our bill, we got chatting with one of the guy's who runs the place and he mentioned that he had recently moved to Canberra and was dismayed at the lack of dumplings places. He's originally from Melbourne and ran one of the dumplings places in Chinatown (not sure which but might have been Camy's or Shanghai House) - which we were very glad to hear! In our umami induced giddiness, we left feeling very satisfied and look forward to returning soon!