In the jungle - Three Monkeys Cafe 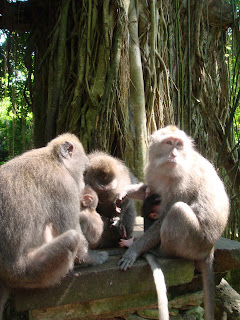 During our stay in Ubud in the mountainous region of Bali, we explored the Sacred Monkey Forest of Padangtegal where the long-tailed macaques rule.  Walking through the forest there were many an eager (naive?) tourist holding bananas to offer these little guys only to be chased and climbed upon by the monkeys in pursuit of the golden treasures. We didn't like the idea of having monkeys on us and instead watched as other people had their belongings searched, their hair messed up and various parts of their anatomy groped.

When we left the forest and continued exploring Ubud, we were thristy and in search of somewhere to sit for a while and relax. Our guide recommended the aptly named Three Monkeys Café on Monkey Forest Road. It’s a slightly more expensive than some of the other places/warungs along the road, but were curious to see for ourselves. 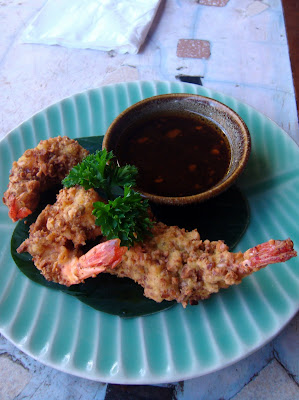 We sat outside overlooking an ornamental pond and rice paddies. The place was quiet and a little slow but the waiter was attentive and engaging. What struck us both when we looked at the menu was the food was very mediterranean- there was sharing menu which included spanakopita and bruschetta and amongst the mains with the nasi goreng was moussaka- in Bali? We were curious but didn't feel hungry enough to try it, opting instead to share some snacks. 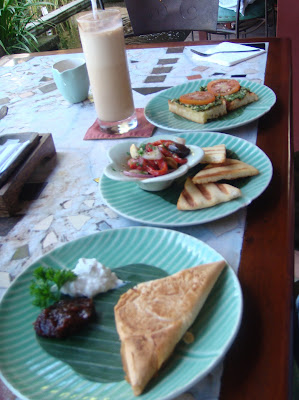 The food was tasty and good, but we were most impressed with the drinks. We had tall glasses of frappe - more like an ice coffee but hit the spot and a vibrant green concoction consisting of lime and mint- it definitely quenched the thirst and tasted tangilicious! 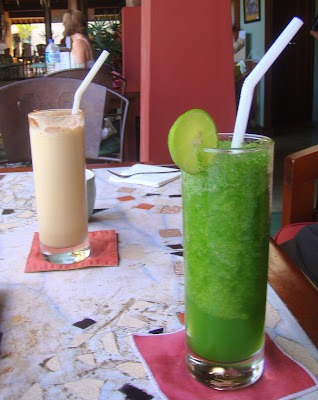 If you happen to find yourself exploring the Monkey Forest in Ubud, take a walk up the main road and relax with a refreshing drink and some unexpected food options in this relaxing cafe.