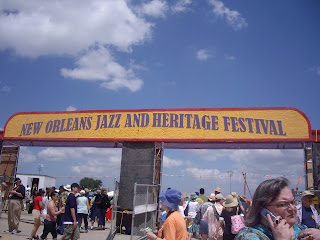 While I have really let my blogging activities fall off the wayside for reasons intricately linked to slothfulness and a general lack of inspiration, I want to state for the record that it’s not because I have not been eating or cooking or enjoying interesting cuisine, because that would be foolish and unhealthy and ...umm physically impossible. Anyway, I found a compelling reason for a blogging comeback in the form of some recent travels to the , where I was there a few weeks ago for a biology conference that fortuitously coincided with the New Orleans Jazz & Heritage Festival. Not that I knew about it at the time, but luckily the sassy & saucy* Vernoona got me to get with the program and got tix for the first weekend. Anyway, as expected itself absolutely delivered on all things delicious (Po’boys, beignets, gumbos, jambalayas, etouffees, pralines, muffulettas, crawfish here & oysters there, Cajun this & Creole that); however, in the case of the festival I learnt that along with the music, food also shares double billing as far as festival attendees are concerned. It is no exaggeration to say the quality of festival food on offer was superb (& downright unique!) – much like the music! Actually, when I think about it, it really does make sense to ensure ample sustenance is provided for the punters who put in the hard yards just to hear some music. It really is hard work trying to toss up which of the bands you’re going to see. For instance, the organizers who decided to schedule Sharon Jones & the Dap Kings at the same time as Etta James performing with The Roots, as well as Earth Wind & Fire were positively evil in my opinion (EWF won out for me, while Vernoona gave Ms Jones a look-see – which you should read about here). It was these sorts of energy-expending decisions that we had to contend with and so seeking sustenance from the food tents from time to time obviously became a priority. 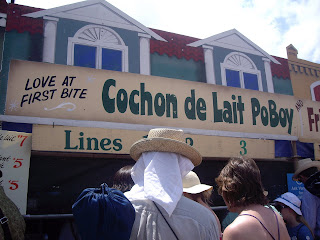 Okay, first up the most utterly delicious discovery of the festival was the Cochon de Lait po’boy. A po’boy is essentially a crusty baguette filled with a type of meat (e.g. shrimp, oysters, crawfish, crab, roast beef) and dressed with accompanying vegetables (usually lettuce, tomatoes, pickles, cabbage) and mayo. The Cochon de Lait is the Maserati of Po’boys in that the filling is made out shredded roasted suckling pig that has been hickory smoked for 12 hours and dressed with coleslaw, and what I guess is a horseradish mayonnaise. You can also opt to drizzle it with some of ’s favourite condiment as I did to great effect. The outlet we scored ours from had the suitable name Love at first bite. Yes. Love....*drool* 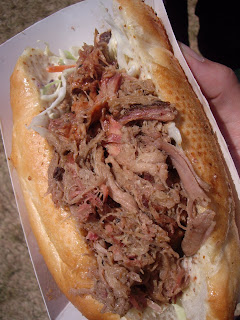 Another delicious offering was the crawfish pasta, which was basically pasta tossed through a creamy sauce (and according to the recipe HEEEAAPPPS of butter) that had generous flecks of crawfish pieces with Creole seasoning to give it some real personality. 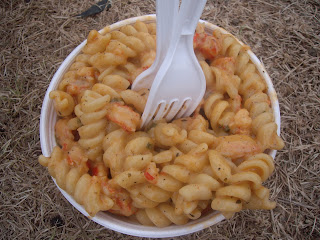 For sweet offerings, as it was a warm & balmy weekend in town, we stuck with the iced treats on offer such as the snowballs (shaved ice flavoured with syrup of our choosing) and mango freezes. In all honesty the snowballs at the festival were overpriced ($3) compared to this kickass old-skool snowball outlet (for more detail check out this forum) we encountered in nearby , which sold them for a mere 75c! This place was sooo awesome (I’m kicking myself for not taking any photos) – you placed your order with the guy at the counter through this small revolving window/platform, which swivelled with your flavoured snowball in a foam cup, and you exchanged this for your three quarters through the same revolving platform. The number of kids that had started to line up behind us (it was the end of the school day) indicated to us the popularity of this particular snowball vending establishment. 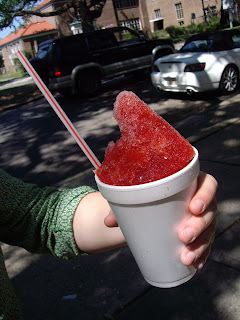 But nevertheless, an iced treat was a suitable way to satisfy a sweet tooth, given the summer-like weather on offer that weekend. As far as refreshments were concerned, the main offerings were the popular frozen daiquiris, iced teas, strawberry lemonades and a particular beverage that, as Australians, bemused the heck out of both myself and Vernoona. Can you guess why? 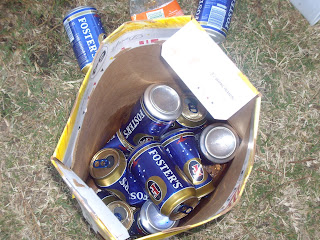 *sassy & saucy is in reference to a shout out made by the jolly (and possibly) bourbon-soused hobo we encountered, who wanted to wish us sassy AND (the emphasis was his) saucy ladies a lovely evening on our stroll through the French Quarter, and as such this has now become part of our vernacular.