On hot Saturday night, I met Jfox & Kaz for dinner before catching a show next door at the Meat Market during the Arts festival. It's pretty embarassing, but I had no idea of the existence of this hotel given its proximity (5 min walk from work), though I'm certain friends have mentioned it in passing. Catching sight of the heritage listed building, it's a wonder how anyone could overlook such an imposing and impressive facade - unless you're myopic or ignorant like me!
Anyhow, should concentrate on the food:

The bar menu looked especially good which made it harder to decide. K was determined to have her steak sandwich, while jfox was torn between the 'fat arse' chook parma and the bacon-wrapped pork loin (yes , pork tastes even better with bacon!) My indecision got the better of me so I ordered two salads (yep I know that's weird), but I was curious about the banana flowers in the prawn salad, while the rocket, pear, goat's curd and brioche salad reminded me of this amazing salad witlof, pear, candied walnut, pancetta and blue cheese I had years ago at Journal and that I still fantasize about! To quote Kramer 'It feels like there's a party in my mouth and everyone's invited'. Kaz informed me that it's a famous Jamie O recipe but this is the closest recipe I can find online. 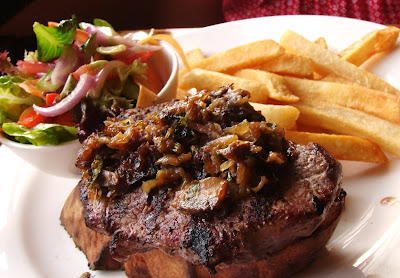 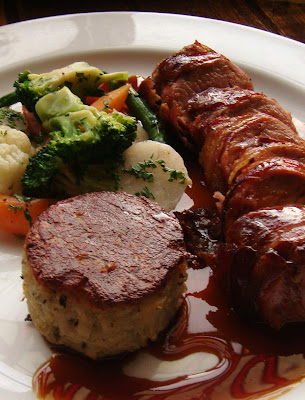 I was lucky to sample both the pork and steak and my tastebuds were buzzing, so my expectations were pretty high when my two salads finally arrived. Although artfully presented I quickly dissected the salad tower, seeking out the banana flower. A shave of carrot. A sliver of cucumber- no banana! I came to the disappointing realization (and if I had my DNA kit I would have tested it!) that the only thing having any similarities to banana was the leaf propping up the stacked salad together. I didn't complain because the prawns were very tasty, though I should have. 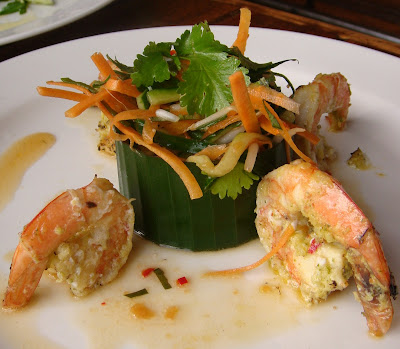 Pear, rocket, goat's cheese salad on brioche with tangy vinaigrette
It was an interesting contrast to have the crispy pear and the poached pear. The goat's curd was delicious but this didn't taste like a salad. It felt more like a twist on the dessert with a side of rocket! Overall, I was disappointed with my meals as they weren't what I had expected but was still happy to have had a pretty enjoyable evening of good quality food (not pub grub!) and an interesting show afterwards.

I'm sure this has happened to everyone- meal arrives slightly (or blaringly!) different from menu description. What do you do?