Catching up with some very good friends that unfortunately don't get to see much anymore- warranted the perfect excuse for a hearty catch up and a good old extended eating expedition. We ventured to the wild west for some early morning yum cha and upon the recommendations of jfox we tried gold leaf in Sunshine (Don't worry if it's on the wrong side of the yarra river you can always try Springvale, Burwood and even Preston- but that's crossing over again-woops!) So of course all the usual culprits were out in the Sunday best and we were treated to a feast of the senses! 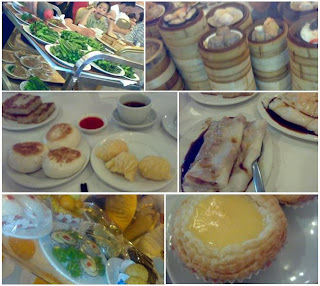 Where to start? There were steamed and fried dumplings galore as attested by the multitude of trays that were passing past us over and over again. We also sampled some glutinous rolls of bbq pork (Char Siu Sou) and prawn rolls, steamed bbq pork buns (Char Siew Bau), taro cakes, sticky rice (Lor Mai Kai) and fried prawn balls which resembled comets (they had a celery tail!). There was so much to choose from and I can gladly say my mouth was bigger than my stomach, otherwise I wouldn't have stopped! 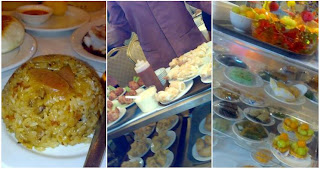 We spotted the dessert tray making the rounds a few times and had our hearts set on having the mango pudding, but it always seemed to bypass our table. At one point I spotted it sitting unattended and went up to drool over the desserts, with assurance from some waitress that it would come to our table after the next rush of people were seated. So we waited and watched and saw it roll down the next aisle of hungry people- frustrated we summoned Hades (our very helpful waiter) and asked for a bowl of silken tofu served with ginger sauce. This was recommended by jfox and although she said it was an acquired taste I really liked it- the texture is interesting but you sort of let it slide down your throat and slurp up the ginger juices! YUM! We got the mango pudding in the end and some egg custard tarts and had to call it a day- there was no more room except for that soon to be vacated from our respective purses! All in all a great feed, moderately priced and best enjoyed with great company- as we did! :) 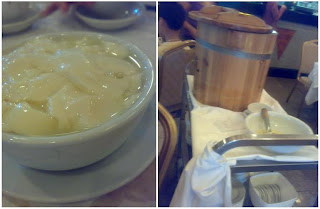