I woke up lazily this past Saturday and over breakfast perused some of the multitude of recipes I print off the internet- fantasising of the chance I'll get to create some concoction sometime soon. Unfortunately it almost always turns out that I end up drooling over it and then get swept into the weekend and before you know it, it's back to work... shikes!

With this hot weather of late and a penchant for something sweet, this recipe for an ice cream cake from Taste inspired me to take to the kitchen after some abscence. Unfortunately I had enough to make only a third (the case of the missing vanilla ice-cream remains unsolved!) and improvised for lack of maltesers. 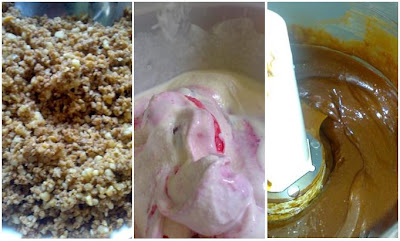 Methodology:
Biscuit mix
- Crush nuts & biscuits roughly in a food processor. Mix together and set aside.
Chocolate cream/custard
-Beat butter and sugar until creamy in a mixer.
-Add eggs, 1 at a time, beating well after each addition.
-Melt chocolate in microwave or if you're not as advanced as me, use a bain-marie careful not to get any moisture on it so it doesn't seize. If it does, add a little bit of cream or butter to reincorporate it.
-Stir chocolate into butter mixture (add Kahlua or some liquer- I forgot!)
Ice cream layer
-In a separate bowl spoon ice-cream and leave until softened. Add a cup or as many raspberries as you like and mush 'em if you want.
-Stir into ice-cream. (I liked them whole so be careful when stirring them in)
Assemblage
-Line base and sides of a smallish ~20cm x 30cm baking dish with baking paper.
-Place half the crushed biscuit/nut mixture onto the bottom of the baking dish.
-Pour over half the chocolate mixture (make sure it has the consistency of thickened cream which hasn't been whipped- thick but runny) If it's too thick ladel it on with spoonfuls but it'll be tricky to spread it over the biscuit/nut mixture without it sticking to the spatula (for me it was a futile endeavour- gave up and let it mix)
- Pour over melted ice cream and raspberries and let it set in the freezer for half an hour. (I didn't and had a drama trying to ladel the thick chocolate cream on top- It ended up sinking into the ice cream mixture but I gave up on that too!)
- Finally if you have averted disaster, pour over the remained chocolate on cooled ice cream and add remaining biscuit/nut mixture on top.
-Leave in freezer over night or for until hard.
-To serve use a knife rinsed under hot water (had trouble trying to cut through the cake as it was too hard) 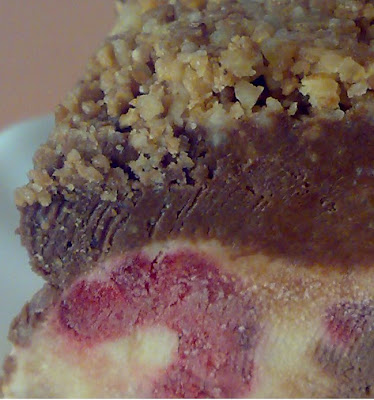