Little Cupcakes
#7, 250 Flinders Street
Melbourne
The bustling blocks nestled within Flinders and Collins Streets from north to south, and Swanston and Elizabeth Streets from east to west are full of pokey places that constitute foodie interest.

In the last half year or so, the laneway situated between Flinders Street and the Degraves Street entrance to the subway has largely been characterised by renovations and extensions (since we are at the subway entrance, I must highly recommend Waffle On which sells, er, waffles and 'le bol de cafe' - a must-taste).
Recent removal of the scaffolding reveals new cafes and clothes shops on the western side of the street. Meanwhile, on the opposite side, near the Italian paper shop and pokey bar, is newcomer Little Cupcakes. 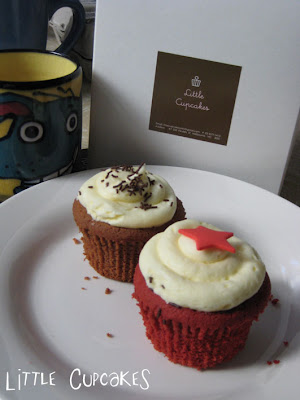 Little Cupcakes has been open for almost a month, and features warm wooden decor and a central communal table. This shop pretty much only sells cupcakes - there were very serious looking bags of sugar, icing sugar, plain flour and more sugar near the wall!

When we visited, there were ~six flavours of cupcakes including chocolate, mint and coconut and these come in two sizes. As always with cupcakes, they are a bit pricey - you'll part with 3.70 for the regular size and 2.50 for a mini-cupcake. There's also a coffee and cupcake deal (written on an oh-so-cute mini-blackboard sign out the front).

The mini-cupcakes are too small to be satisfying on their own, but make a great dessert if you've gorged yourself elsewhere in the precinct. 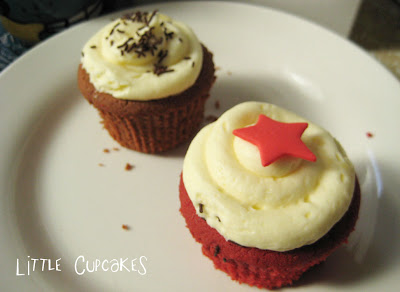 Of the regular sizes, we tried the Red Velvet cupcake - a cocoa (didn't taste like chocolate to us?) based cake with a creamy frosting on top; and a regular chocolate cupcake (again, we guessed cocoa based rather than real chocolate). The cakes themselves were not too sweet and were balanced nicely by the frosting on top. The texture is just cakey enough, but perhaps could be either a bit lighter or a little bit more moist.

It will be interesting to see if cupcake sales alone can sustain business, there was certainly a lot of walk-in traffic in the short time we were there. And a lot of ooh-ing and ah-ing once the cupcakes themselves were spotted. We didn't try the cawfee so we might just have to return... maybe mint next time? Bonus points for friendly staff who took extra, extra care in packing the cupcakes in takeaway boxes.

(big thanks to Kim who first alerted me to this shop and has been eyeing off its renovation and impending opening - ;) thanks for the cupcakes Kim!)