Classics from the Vault: Paella valenciana

It's a little cheeky of me to call this a vault classic as I've only successfully made this dish three times but given that everyone and their dog has heard of it, I may as well give it the vault classic treatment. I got inspired to whip this dish up a few months ago when a recipe was published in the Good Weekend (provided by David Herbert if I remember correctly) and I was so happy with the outcome that I vowed to make it again...and again. The third time things were different because I also had in that time acquired a paella pan (because I was in such dire need of yet another kitchen knicknack). Paella originates from Valencia (hence the name) and the few hard and fast rules about it are that it should always have these three key ingredients: rice (who knew?), saffron and olive oil. Furthermore, as the name implies you need to cook this all up in one pan (believe me!). There are a few other lesser known caveats that might be worthwhile considering when preparing this meal, as I will explain further on. 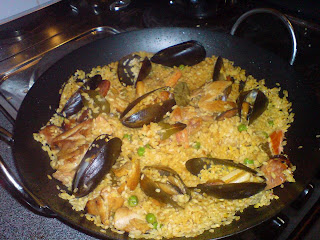 Ingredients (unless specified, quantities can be arbitrary)
Extra virgin olive oil
chicken thighs
chopped onions
prawns
mussels
baby octopus
(smoked trout)
garlic clove
dried thyme
2 - 4 bay leaf (don't overdo it though)
A decent couple of saffron strands
cumin
sweet paprika
white wine
round grain rice (Calasparra or Arborio)
1L chicken stock
chorizo
green peas
green beans
chopped parsley
[strikethoughs refer to my omissions; brackets my own inclusions]
Method
Place pan over a hot flame (not an electric plate as I had to contend with) and splash in a generous amount of oil. When hot enough add a couple of the chicken thighs and pan fry until golden.
Drain well and start sauteeing the chopped onions and garlic before readding the cooked thighs (I usually try to break up the pieces a bit). Then add in slices of chorizo and frying until crisp (at this stage you can also toss in the seafood to cook, though in my case I only used mussels that I had earlier steamed).
At this point add a decent sprinkle of dried thyme and cumin (I used whole cumin seeds) and season with a little bit of salt. In a mortar & pestle grind up the saffron threads as best you can (I sprinkle a little bit of salt to aid this process) and add to the pan, as well as the paprika (I used smoked paprika, though lamentably not the best quality) Stir in together and then add the rice (enough to cover the base of the pan).
Splash in some white wine (I used a semillion/sauvignon blanc blend), stir through and wait until evaporated. Toss in the steamed mussels, flakes of smoked trout and a handful of peas and/or beans. At this stage add a good litre of chicken stock that you will have had simmering nearby and pour into the pan ensuring that that the rice is covered by the stock. Lower to a simmer and leave for 20 - 30 mins, though keeping an eye on things every now and again. When cooked add a heapful to a plate and serve with a wedge of lemon. Make sure you get a mussel too as they tend to disappear pretty quickly!
Some caveats:
- this dish would work so much better on a gas stovetop. My special paella pan wasn't evenly distributing heat to the outer edges of the pan and so the centre cooked well while the outer edges were on the crunchy side of things. Electric stove tops tend to heat up quickly but don't reduce the heat as effectively when you're hoping for simmering.
- Please refrain from using ordinary short grain rice. I did so this time around and found it didn't take on the flavours as well as it did when I used arborio. Serves me right!
- Though saffron is expensive, use a decent number (6 - 8) of strands to flavour the dish as this element really does make the dish and grinding it up with a mortar & pestle ensures you get the most colour and flavour out of it
- Bay leaves also add a good flavour but don't go overboard like I did, otherwise you'll end up with pockets of intense bitter bay leaf flavour within the rice.
- Don't let the rice get overcooked. Nothing ruins the enjoyment of such a flavourful dish as much as soggy rice does. If the stock hasn't been completely absorbed but the rice is cooked then that's still fine to serve.
- Finally, don't let this seemingly endless list of ingredients dictate whether you are equipped to make this, the last remaining hard and fast rule about paellas is that you add whatever you feel like - provided you always have the holy trinity of rice, saffron & olive oil in the mix. Seafood seems to be a popular inclusion, though you can have a chicken only version, some recipes also have snails or rabbits, and looky here you can even make a vegan version!
------
Long after posting this, I came across a post on Truffle's blog of a divine looking paella that I felt I couldn't pass up without mentioning here. Truly spectacular! Hope you're finally persuaded to cook this dish up!

at 1:27 am Posted by Serenity Later