My family loves Korean food. We used to travel to Carnegie for lunch especially for lunch at 7&7, a family run restaurant in Koornang Road (not too far from the original Grandma Kimchi restaurant).

Along Victoria Street on the fringe of the CBD, there's a thriving string of Korean eateries. These stretch from Mel-To Restaurant and Bar at #260 near Peel Street [correction added, now Todouri], all the way up to Rathdowne/Exhibition Street with Han Guk Kwan at #13A (incidentally, both of which do a mean BBQ).
And of course, we must mention the City Mart on the corner of Elizabeth Street opposite the Queen Vic Market. Drop in for some Korean groceries, crockery, DVDs or maybe some fresh kim-chi (spicy pickled cabbage, sometimes turnip) from the fridge?

The most recent addition to this Korean kulinary strip is Hallah. It's a welcoming restaurant: the staff were friendly and attentive, and the food fresh and quick. 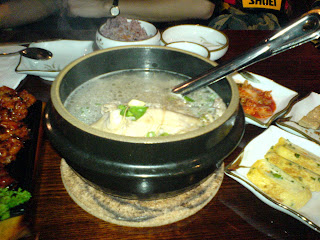 We tried the Samgyetang or chicken ginseng soup, which was a warming and nutritious counterbalance to Friday night drinks. This was perfectly accompanied by some Spicy Pork (apologies for the non-descript name, Elmo ordered due to my ...er, Friday night drinks :D). 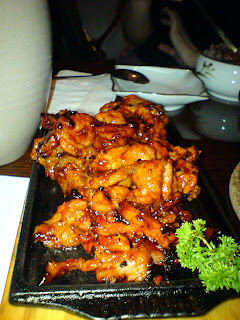 And of course, some kim chi and corn tea to round off the meal ;)

[thanks to elmo for the pics]