The Not So Humble Spud

The one and only thing about attending a dinner under sufferage is that at least you have some control over what you decide to contribute to it in terms of edibles. This potato salad is easy to make, and delish. Last night because of some bad timing on my part, this was served warm which I quite like - makes you feel as if you're pilfering cupcakes straight off the production line. The bacon bits, along with the tang of the mustards, really make this take on the potato salad just that little bit different.

This is taken from Stephanie Alexander's The Cook's Companion. What I love about Stephanie is that her recipes make it OK to use those most maligned of food groups - fats, salt and sugar.

Boil potatoes (in their jackets) until tender. Peel and cut into ~3 cm cubes. Set aside in a largish bowl.
Fry the bacon gently on low heat until crisp, and retain the bacon fat. Do not take pan off the heat yet.
In a bowl, combine sour cream, mustards, vinegar and salt until all lumpy bits are removed. Tip into the pan containing the bacon, and stir thoroughly to mix.
Quickly pour the mustard-cream mixture over the potato evenly, lifting and stirring to mix.
Scatter the chives over the top.
Season with pepper if desired.
Serve at room temperature. 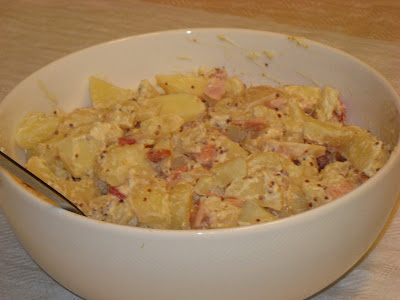 at 5:25 pm Posted by yossarian