This recipe is taken from The Crabapple Bakery Cupcake Cookbook, generously procured for me by M's and Flygirl. Rather than using the icing suggested in the book which looked a bit too sweet - even for me - I used the chocolate fudge icing instead – for an even more decadent chocolate hit.

Preheat oven to 170 oC/325 0F.
Line one 12-hole muffin tray with cupcake papers.
Sift together the flour, bicarb, baking powder and salt.
In another bowl, whisk together the coffee, hot water and coca until you get a smooth paste. Add the cold water and whisk until combined.
In a large mixing bowl, cream the butter for 1-2 minutes. Add the castor sugar a third at a time, beating for 2 minutes after each addition. After the final addition, beat until the mixture looks fluffy and the sugar has dissolved.
Add eggs one at a time, beating for 1 minute after each addition.
Add vanilla and beat until combined.
Add one quarter of the flour to the creamed mixture and beat on low speed until combined. Add one third of the cocoa mixture and beat until combined.
Repeat twice more.
Add the remaining flour and beat only until thoroughly combined.
Spoon mixture into cupcake papers (an ice-cream scooper gives a good amount), such that each is about three quarters full.
Let the mixture sit at room temperature for 20 minutes. This should help prevent cracking on top. Sorry to sound scientific, but does anyone know the mechanism for this?
Bake for 18-20 minutes, or until a skewer comes out clean. I found that the batter was pretty runny when I spooned it in, so my batch took about 25 minutes all up.
Remove cupcakes from muffin tray immediately and cool on wire rack for 30 minutes before icing. 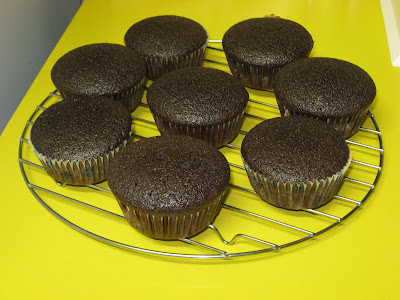 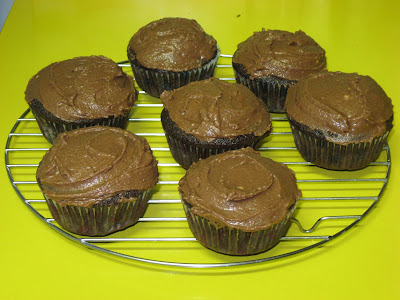 Not bad, but the icing definitely makes this. I might be a poor judge because I really like my chockie cake to be quite moist. Maybe worth trying with cooking chocolate instead of cocoa?? Dang, will just have to have another attempt…

at 8:45 pm Posted by yossarian