There are many strange practises in Canberra, not including the various goings on behind closed doors at Parliament. For instance, over the Queen's birthday weekend one may legally purchase fireworks and proceed to light them at leisure- but only during the 3 day long weekend and only with a permit. Dang!

You can also find stores that offer something that claims to be better than ice cream, that is: Frozen custard. Strange? Yep! (Apparently it is known as French ice cream and yet another relative of the sorbet/frozen yoghurt/ice cream/gelati family). If you're a little perplexed check out wikipedia's definitions for ice cream vs. frozen custard.
So, on a chilly evening we sought refuge at Rubee's original frozen custard. Their gimmick revolved around a make your own frozen custard treat, where the customer can create a concrete- a custard base with a choice of 3 mix-ins of fruit, nuts or candy. 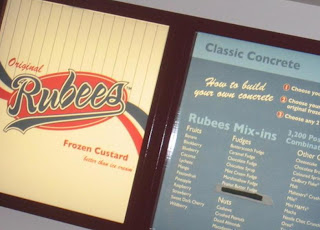 Although we were only going for a hot chocolate, curiosity won out and I had to try for myself and see what was better than ice cream. But what flavour to decide upon when favourites include: beige delight, mud bucket and nut puddle? Hmmm... 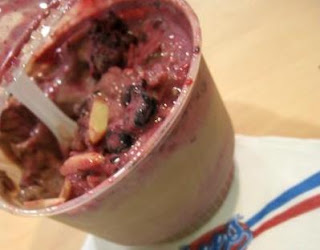 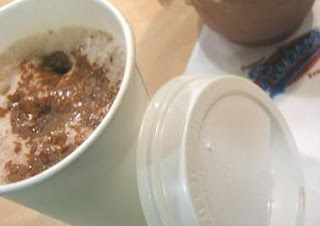 ...and a nice cup of hot chocolate sprinkled with choc flakes 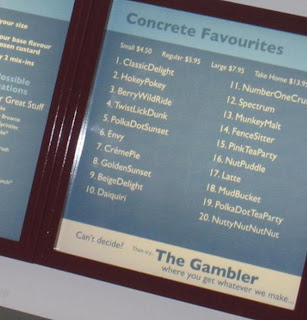 Can't decide? There's always "The Gambler" where you get whatever they decide to make!
The verdict: Still tasted like ice cream but with a distinct floury aftertaste. Interesting, but an acquired taste.