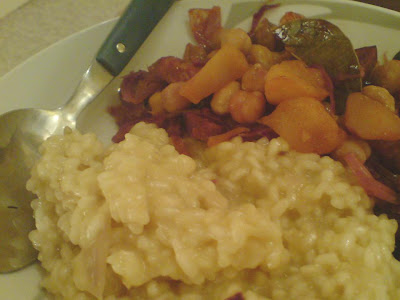 Everyone loves a good risotto and so I thought to try my hand at making it c/o of the sage instruction of The Cooks Book. This recipe called for the sweating of a handful of chopped shallots (or onions) in some butter and olive oil until soft. Arborio rice was added and mixed with the fried onion mixture until all the grains were coated with the fat. Some dry white wine was added and stirred into the rice mixture until absorbed. At the same time stock (e.g chicken) was simmering away and ladlefuls at a time were added to the rice to be absorbed until the rice reached the desired cooked state. A small bit of butter and some freshly grated parmesan were added to the final stages of the cooked rice and quickly stirred through before serving.

As an accompaniment to the risotto, I quickly fried up some chopped red cabbage, apple and onions with slices of chorizo in some olive oil. I then let these braise away with a bit of white wine and a splash of balsamic vinegar, before adding a tin of chick peas, some smoked paprika, salt and a few bay leafs. This semi-improvisation didn't turn out too bad and though the chorizo was a little bit spicier than I had banked on, it still made for a tasty and hearty meal.