Strolling down the shopping/eating strip of Adelaide's answer to St Kilda meets Bourke Street, we were struck by hunger pangs and decided to venture into Good Life Modern Organic Pizza. Okay, initially I was a bit put off by the prices ($20 for a medium margarita) and the holier than thou espousal of all things organic! But... we were hungry... and tired... and curious... and just as well!

Lots of critics rave on about the oxymoronic concept behind this place- healthy junkfood- can it work? The odd placed self promoting article plastered on the mirror in the restaurant bathrooms (Gourmet Traveller) claims so and now I can agree. 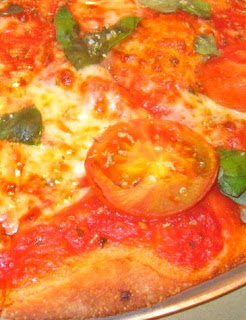 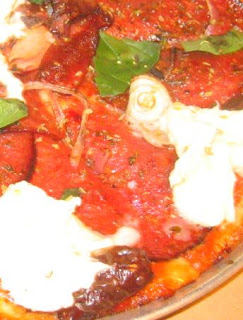 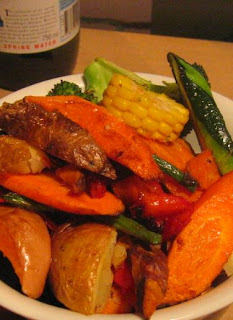 Perusing through the pizza-only menu with lavish offerings such as free-range lobster or roast duck & shitake mushrooms we settled instead for the simple classics as a measure of comparison to other pizza places. The margarita's cheese to tomato and basil ratio was perfect with flakes of oregano and sea salt creating little bursts of flavour on your tongue. The base was made of Laucke organic flour, filtered water and fresh yeast that was aged over 24 hours, which made for a crunchy though light crust. The locally produced salami was the closest thing to a pepperoni pizza laced with herbs, bococcini and kalamata-style (sorry they ain't from Kalamata re: Champagne argument!) olives. It made for a tasty salt hit that was tempered by our side order of organic roast vegetables- cooked to crunchy perfection (so that you can taste the subtle sweetness as the sugars start to caramelise!) Yum!

You can guzzle your weight's worth of quality organic South Australian wines and beers, though it was a welcome gesture to have a complimentary bottle of sparkling water given the non-organic nature of Adelaide's water!

Overall, our initial reluctance dissipated after tasting the food and between 3 the bill was actually quite modest. It works!