Classics from the vault: Spag & meatballs 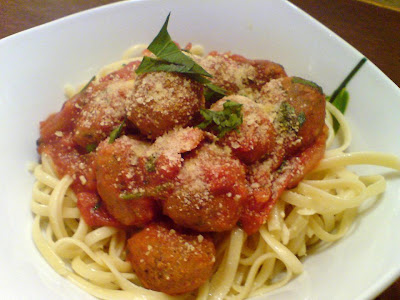 Ah, when it rains it pours, eh? This dish came at a time when the cupboard was bare or at least bereft of anything interesting (and quick) to snack on and thus became increasingly obvious that in order to eat, some effort was required. What I came up with was a reinterpretation of that old classic: spaghetti & meatballs. While I put some leftover linguine on the boil, I began the preparations for the meatball sauce. For this I thought to try out a Jamie Oliver short cut where he used good quality sausages for the meatballs. I had some italian style pork & veal sausages in the freezer that I thawed out and removed from their casing. Rolled the meat into little bite sized meatballs and quickly fried them up, then added some chopped red onion, a can of crushed tomatoes, chopped continental parsley and seasoned with the usual suspects (S & P), letting these simmer away. When done, a bit of parmesan, some chopped parsley and voila a very tasty meal was ready for demolition (!). If this doesn't rock you boat perhaps you might be interested in finding out more about the curiously sounding spag & meatball cake (!)

at 9:24 pm Posted by Serenity Later