I've been wanting to try this little gem for a long time and with the Comedy Festival in full swing, it seemed as good time as any to try out Bar Lourinha before we went to catch a standup show. I have to admit that I've developed a bit of a soft spot for snacky-type Spanish/Portuguese styled cuisine. With all that emphasis on salty, seafoody type of fare (plus top-notch vino/vinho) its hard to see how could you go wrong. John Lethlean did a review of the place for Epicure last year and seemed quite impressed with the place, and while ordinarily that would be grounds for me to avoid a place (i.e. too fancy-schmancy), I was happy to find that he was spot on about the place (though the menu's changed slightly since his visit). Further to add that while the place had a sophistimacated vibe about it there was definite warmth and heart beneath its young go-getter facade. 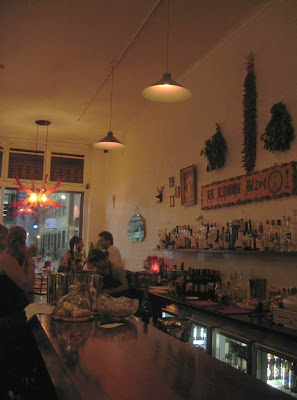 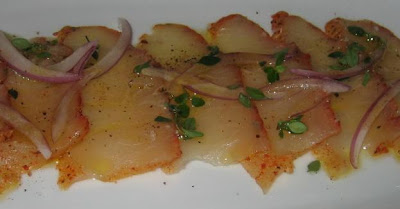 Yellow tail kingfish panchetta and lemon oil: It should be illegal to taste so good!!! Slivers of kingfish were drizzled in a lemony or lemon-scented oil and were sprinkled with what appeared to be sumac, as well as bits of red onion and a herb, whose identity escapes me. To paraphrase Kramer from Seinfeld, these bits of kingfish were sliced thinly so that the flavour has nowhere to hide!

Ortiz anchovy and goats cheese montadito: A very popular spanish type dish on the menu (MoVida does a version of this too), which was (not suprisingly) sublime. I wouldn't have said no to another half dozen of these little guys except for the fact that i wanted to try.... 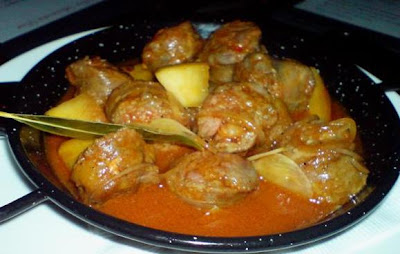 Chorizo with apple cider and preserved lemon: the preserved lemon and sweet paprika flavouring of the sauce gave the chorizo added lift (not that chorizo really needs anything to add further to its yumbo-jumboness!). Definite sensory overload (but in a very, very good way!!!) 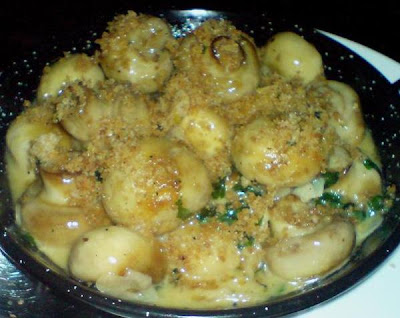 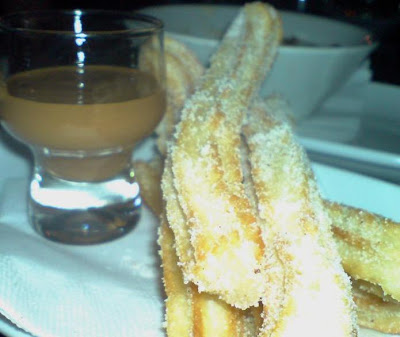 Churros and dulce de leche: It should be mandatory to try an establishment's take on that classic staple, fried dough, in this case Bar Lourinha's offering of those delightful little morsels known as churros. These whispy little things were sublime and almost dissolved when consumed. Just to be controversial, I'm going to step up here and declare these to be even better than the ones they serve at MoVida. I like the chocolate dipping sauce here better as I found it less spicier and cinnamon-ey. 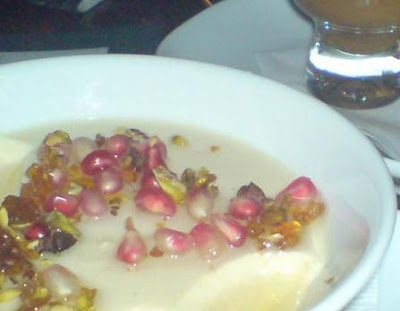 Pomegranate crema and pistachio praline: this divine bowl of panna cotta-like bliss was da bomb, ya hear?!! As you can see from the picture, we couldn't even wait to take an untainted photo. Lady Lunchalot blogged this place too and had a version with pomegranate with blood orange, which sounds heavenly though I guess it depends on seasonal availability of produce. 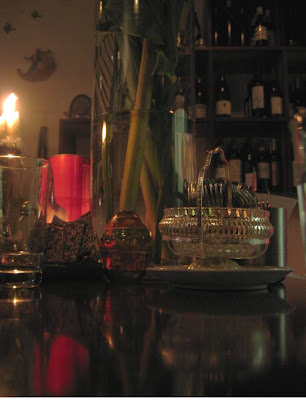 Update: In the time since I last ate at BL, another food blogger posted a review on his blog describing a slightly different experience to the one I had. Apparently the owner/chef of BL was not impressed and allegedly sent an email to Thanh of the cease and desist variety, citing the dubious reason of photo-related copyright infringement. We have yet to receive a similar missive, but that may be more related to the fact that we don't actually have an email contact listed on this blog rather than the lack of offense generated by my contrastingly positive review. If this email really came from Matt Connell, then this is a cause for worry. I like to read other food blogs to get another person's perspective on places they've eaten, recipes they've tried and to get new ideas on food. As with all things, not everyone will have a glowing review of a place, much in the same way that its a given that not everyone is going to love the latest sequel for Spiderman or Pirates of the Caribbean or Shrek, or whatever. I can't speak for other readers of food blogs, but one negative review isn't going to make me less keen to try out a place, all its going to do is offer me someone's opinion. If every dodgy or unfavourable review causes chefs to hunch up and launch this kind of C & D knee-jerk reaction, then where does the line get drawn?

at 7:49 pm Posted by Serenity Later